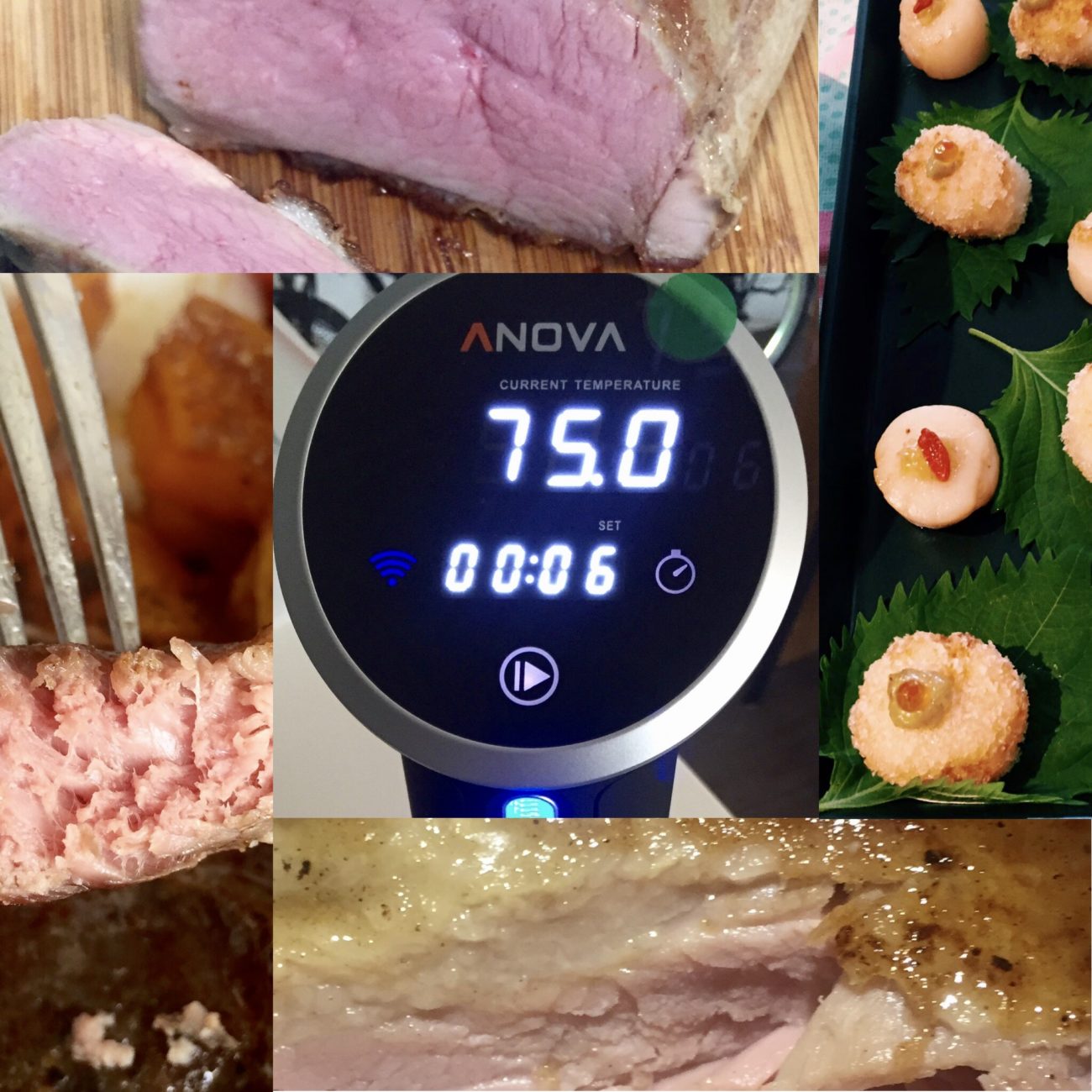 Today, I would like to review the Anova Precision Cooker WIFI model. This Anova Sous Vide review is quite long overdue. We have had the machine for 3, going on 4 months now and have cooked all sorts of meats and an occasional vegetable with it.

What is sous vide? Sous vide is the method of cooking food in a low temperature in water bath or heat controlled environment for a longer period of time. This low heat cooking cooks the food evenly and thoroughly at a precise temperature allowing for very good control on the doneness and texture of the final product.

Now, some people have this misconception that using the sous vide method removes the finesse and skill from cooking. Erm. It is not a magic stick. It is just a tool like an oven or a rice cooker. So there is no guarantee that everything is gonna come out perfect. But it simplifies the temperature control by allowing you to control with precision, which is what I think every chef would love. It is like no engineer is going to reject their tools of precise measure just so that they can work with gut feel, experience and skill.  I feel it is refining the “art” and finesse of cooking. Chefs use it. Now we commoners can use it too! It still takes skill to do a good sous vide because unless you can get a cut of meat that it exactly as per recommended by recipe (which usually does not state), you need skills to judge if any variables needs to be adjusted according to your cut.

For example, sometimes I get thicker cut of pork chop, and sometimes the uncle cuts them rather thinly. I need to adjust the cooking time accordingly or risk the having bloody pork chops. Or after trying the recipe, I find that the duck is still a bit too bloody, we need to adjust it accordingly too. It is not a magic stick that you just press a few buttons and expect perfection every time, but once you get the hang of it, yeah, it is pretty much a magic stick. Till then, you still have to experiment and get to know your meats and stick.

Doneness of the meats aside, you also need the skill to season and marinate it well. I made a mistake of not letting the duck leg confit marinate long enough thinking adding more salt and marinate will compensate for lack of time (1 day instead of 1.5 to 2 days). Although it cooked perfectly, it was a little under seasoned. But the duck breast that marinated together (usually recipe says overnight) tasted a lot better with the 1 day (24 hour) marinate.

Now, back to the Anova. We waited months for the WIFI international version to be out and it is worth the wait. Many times during the wait, I kept questioning why don’t we just go with the bluetooth version. And the argument is that for just a few dollars more, we get this option. And what good is this option? It means, when we go out for short errands or say for yoga class, I can set it up before going out, and I can start it cooking before I make my way back so that when I am home, it will be almost done. Or when I am cooking 8 hour long meats, I can monitor the cooking when I am not home. The few more bucks is worth it and anyway, I just checked that they have phased out the bluetooth cooker.

Once paired, the WIFI function works very well. But if you need to re-pair because of change in your wifi network, it is a little more complicated but do-able.

Now there are 2 apps for Anova. One is the ANOVA WIFI version which I guess came out later and the other is the old app, simply named ANOVA. The Anova app (older one) has more recipes, whereas the WIFI app has a very simple catalogue for you to choose your meats and doneness. This is a great feature and a quick reference. The app is simple to use and functional. My issue is that for new users, the app can give more information like what thickness of cut is this recommended for or at least have a section telling us how to adjust. Will save some trial and error on our end. The wifi app also does not have a lot of meats to choose from. Chicken, corn, eggs, hamburger, pork chops, ribs, sausage, steak and turkey. No duck or fish, or any other seafood. Though I find that the Anova is great for cooking these. In fact, some chefs said that the sous vide method was created to cook duck confit. Hmmm…. Not sure how true.

For the older app, there are more recipes that you can search for and they are more complete recipes and not just to tell you cooking temperature and time for desired doneness with cooking suggestions. I downloaded both as both can be used to pair and well, I can get the best of both worlds.

We love that it is sleek and easy to store without compromising on use. The control panel has proven useful many times when I was too lazy to check on my phone, while I was working in the kitchen. So to us, having a screen and controls on the stick is a plus.

Heating is also a breeze as it heats pretty quickly. If I am using a 19cm pot for 2 packets of meat, it takes maybe 5 minutes to reach 60C. I do notice that the last 0.5C is the longest to reach. When temperature is almost there, it will usually give a beep to alert you to get ready or if you are ready, you can start placing the meats in. Once 60C is hit, the timer starts to do a count down and when the time is up, it will let out a beep and the app will also alert you through your phone with a pop up. Now, with the wifi, it is cool that even if you are not home, you can just shut down the cooker with your phone.

Washing it is also pretty easy as the bottom cap and outer casing surrounding the heating elements can be removed easily with a twist for better cleaning. In any case, usually you just need to make sure all water is out before you store, and don’t really have to clean as it was sitting in clean water to begin with. But I had to really clean it once because my bag for duck confit burst and I am grateful it is pretty easy to clean.

Basically, a sous vide machine is not rocket science. It is essentially a thermostat. Then they added a screen and wifi and an app and made it snazzy. Nothing major can go wrong here and some people even created their own. It just does not look so good.

I can’t really think of one. Except that I wish I have an insulated pot deep enough to use the sous vide in. Well, we don’t want to get one for this purpose though Ed was trying to persuade me to get a transparent rubbermaid container like how ChefSteps. I am still considering on what else I can gain from buying this big container.

Currently, for bigger quantities of sous vide, we use our large 31cm oval cast iron pot. The cast iron helps retain heat and there is ample space to sous vide loads of food. For 2 of us with 2-4 packs, we usually use our 19cm pasta pot from Ikea. To prevent heat loss, we covered both pots with aluminum foil. We have tried using a shower cap, but unless you have loads of shower caps at home and they fit your pot, I don’t think it is worth the trouble. So far, the longest we had to sous vide was duck confit for 8-10 hours. Most other stuff we cooked only required 1 hour max.

DO YOU NEED IT?

Ed and I don’t like to have too many equipment lying around (though actually we do have a lot of equipment), but we don’t get stuff on a whim or it may become a white elephant. For example, when we bought a pasta machine, we made pasta by hand and really liked the product and agree that it is not realistic to make it by hand each time, before we decided on investing in one, and even then we got a really cheap yet functional one from Indonesia (less than $40) and we made sure we really use it often enough (average once a month) and we endured the faults of this machine for 2 years before deciding to finally upgrade and we did quite a bit of research and slept on it for a while before deciding on the final buy. It is not just about spending money, but we don’t want to end up with white elephants and introducing clutter as well. So we do not encourage others to buy without thinking through if they really need it.

Similarly with the Anova, before the stick cookers came about were the chunky big complete cookers with a tank, vacuum seal and thermostat and costs a bomb. We laughed at the idea of us getting that and never every considered one. But when the sticks came about, it caught our eye as the storage and price issues were removed. Still, we watched tons of videos and Ed tried to persuade me for months arguing his points. Finally I decided to try sous vide using a thermal pot and after tasting the pork chops (I never knew pork chops could taste so tender), I was sold on sous vide cooking method but still not so much on the machine, because hey, now we can do it without machine! But after a second attempt on the cooler box, I decided that the stick is worth $240 if it produces meats so tender, allows me to cook different meats (so long as temperature is the same) at the same time (I don’t take beef) and is pretty much quite hands off and allows remote cooking.

The convenience, ease of use, design (small footprint) and most importantly knowing that we will use it at least few times a month is enough to convince me we can buy this. We considered a few models but at the time of our purchase, only Anova offers Wifi, is compact yet operational without having to use another tool (phone) so I have a back up if there are connection issues or if the screen spoils.

Do you need it? You have to decide. Is it the best in the market? Well, I know a few models like the Joule is launching soon and there are other brands like sansaire, and some fundraisers that you can check status of. These are just stick sous vide cookers. You will have to do some research, compare and decide which is best for you.

If you already have a newly bought sous vide or would like to try to sous vide some scallops (one of the easiest things to sous vide), you can refer to the recipe here.