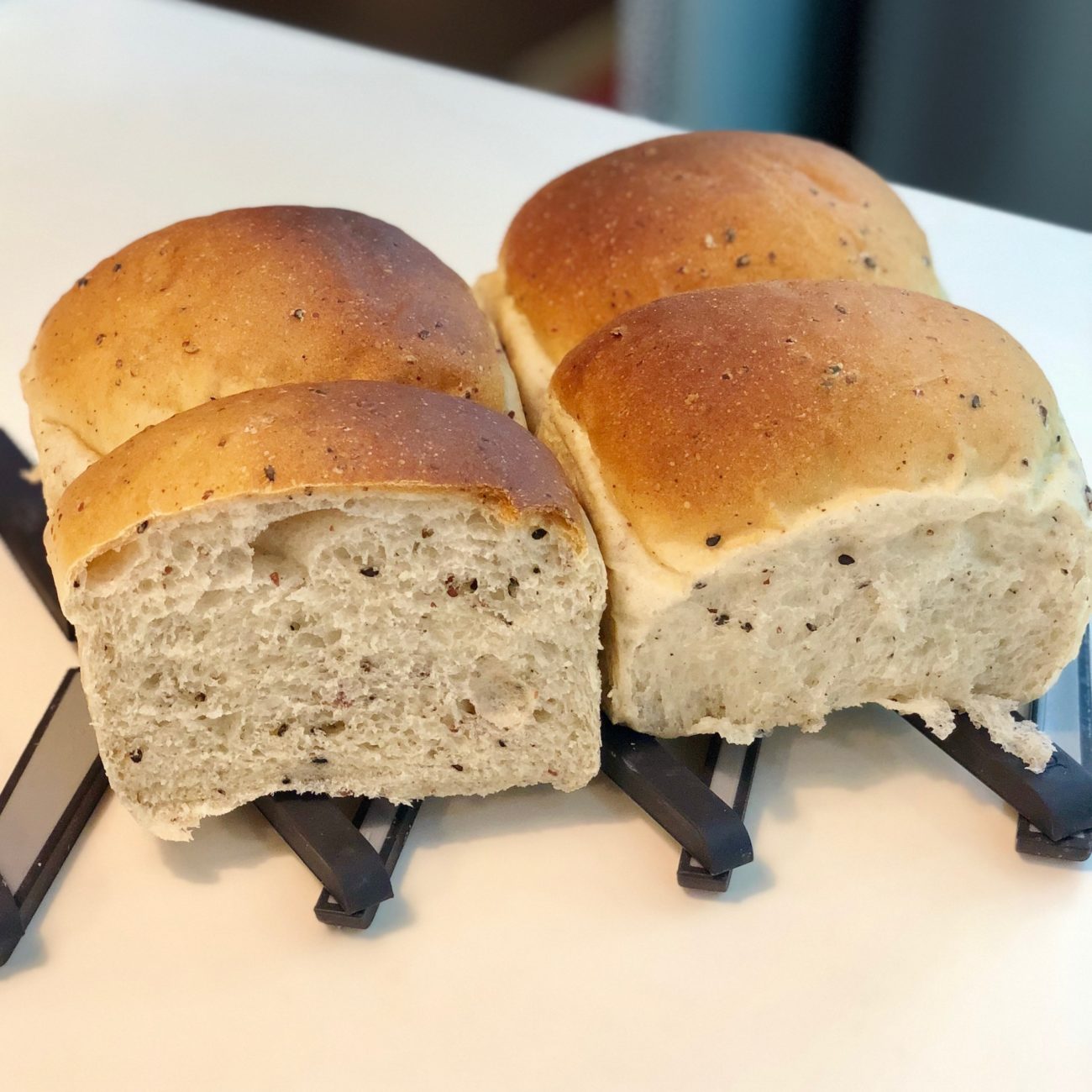 A friend sent me this soft sourdough wholemeal bread recipe and shared her experience baking it. I have always been looking for a soft sourdough wholemeal bread recipe from nasilemaklover so I was super stoked and decided to try it immediately. Especially since she had success, giving me confidence in the recipe. I decided to write about this because I wanted to share more on managing sourdough starters and the baking process. Recipe wise, I did not really alter except for the milk which I think all of us will add different amounts.

I have always been only baking crusty sourdough breads and when I want soft breads, I cannot add sourdough. I tried a sourdough soft bread recipe once and it was a TOTAL disaster. Since then I did not have the courage to try again. So thanks to my friend Xinhui, this is really a breakthrough for me.

This is key. This is what will help the bread rise. For those that do not have starters and you are starting from scratch, I will write another blog on how to start one just for reference on my blog… In the meantime, Nasilemaklover has one too. But then you can also ask around in FB groups or see if you anyone you know has one that can donate some to you. Most people end up throwing excess starter with each feed anyway, which I feel is a waste of resources. Not a matter of money but on wasting food. I have some extra if you need.

So we do not feed our starter very frequently to prevent this waste. And we do other stuff like sourdough pasta or sourdough pancakes that requires only a sleeping starter to use up any excess. Do a search online and you will find loads of sleeping starter recipes. We have a container of starter that we keep in the fridge and we feed feed it only when it is running low in quantity.

How can I bake without an active starter? I do JIT (just in time) feeding and only how much I need. If a recipe needs 100g of starter, I will take out 100/27 = 3.7g round up to nearest whole say 5g for wastage factor (yea super little) and then feed it 3 times. Remember to weigh your container and label the container weight so that you can reduce it from each subsequent feeding to know how much starter there is actually in there. Each time I feed, it will be 1 part starter, 1 part water and 1 part flour. So in this case, 5g flour and 5g water. Cover it loosely to prevent drying and just leave it.

In our warm Singapore climate, we can feed once every 4 hours or so. So I usually do the first feed overnight right before I go to sleep. Then next morning, I will feed it again. Say now I have about 13g starter, I will feed 13g water and 13g flour. So I will have about 39g of starter in the container provided nothing was stuck to my fork after stirring…

After 4 hours or so, in the afternoon, It should be pretty bubbly. I will give it one last feed. Weigh my container, reduce the weight of container and oh, I have 35g in there! So I will feed 35g flour and 35g water. Stir and cover and again let it sit. After it is doubled and all bubbly, it is ready to use! If you are not so sure, you can test the starter by taking a tiny bit out and dunking it into a small bowl of water. If it floats, it is good. If it sinks, sorry, not bubbly enough.

So I was busy and I forgot the time, and I gave the last feed at 4pm. Damn. So I only started making my bread at 8pm. I did not notice the recipe calls for a 2 hour proofing followed by a 3 hour second proof. I only saw it after I have kneaded for first proof. Usually my crusty sourdough breads only require one final proof of 1 hour, max 2. The initials were short spurts of 20min proofs. So I was like….. Ok lor, overnight proof lor… Which I honestly, do not like because it takes some time for the dough to warm up to room temperature and proof. But this time, I set my alarm to 2 hours before my usual wake, then woke up, took the pan out of the fridge and just left it on the counter so that when I wake, it was perfect. Hehehe…

I have not tried hand kneading for this recipe. So this recipe is for those with stand mixers. There is no real timing to how long to knead a bread but have to learn to recognise when it is ready. Some people just knead till the dough feels “right”, some people do the dimple test, some people do the window pane test. I highly recommend window pane test. If you are very familiar with a recipe, maybe you can skip and just knead till it feels “right”. I realise that insufficient kneading tends to result in a bread that will not be elastic enough and thus not soft enough. Even with crusty breads, you need the elasticity to hold the structure.

However, with this recipe, I did not really do the window pane because I tried and it was so elastic and stringy and sticky, I was like damn. Goner. But phew… it was not. But if I had not done the test, I would have stopped kneading much earlier. Which probably would not have resulted in the soft bread.

After I weighed out all the ingredients, I gave it a quick mix with the spatula so that the flour will not fly around so much when I start kneading it on the machine. Then I added 20g of milk and started the machine on pulse then on speed 1. Then slowly added more milk till the dough started coming together more and I let it knead at speed 4. It came together very neatly, not sticking to the sides. I had used 115g of milk. My friend used 60g if I am not wrong. So it really depends on how wet your starter is, as Sonia (a.k.a Nasi Lemak Lover) said in her blog.

After it is all a neat ball, I started to add my butter. Ok, shoot. I forgot to let my butter warm to room temperature. So I dumped it in and let it knead in slowly. I went on speed 7 to let the dough heat the butter against the walls of the bowl so that it will be incorporated faster. Did not take long before the butter is no longer visible. The dough is really clean and neat. So I pinched the dough and pulled a little, it breaks off. No go.

To do the window pane test, simple just pinch a small marble size of the dough off. Roll it in your palms. If it is too sticky to roll, then usually, I will take it that it is not ready. Then pull the ball apart to form a thin flat sheet with your fingers. If it stretches thin enough for the light to shine through the dough without breaking up, then it passes the test. The whole point is to test the elasticity of the dough.

I decided to rest the dough for 20 minutes, what some bakers refer to as the “autolyse”. This is basically to let the dough rest and let the flour absorb the moisture and let the enzymes do some work.

Then I came back to knead again, varying the speeds. Because the dough was so neat, it was not clinging on the walls so I upped the speed so that it will hit on the walls and have pushing action. Then it suddenly got softer and more elastic and started sticking to the base more. So I lowered the speed and it got glossier but also wetter. Panic. I did the window pane and although it passed, it was so sticky, it kept stretching even when I was basically trying to dislodge it from my fingers. A bit like a spider web. -_- It did kinda pass the test… Usually the dough is quite clean after it passes the test. Then I will usually roll into a dough ball and then set it back into the bowl for first proof. In this case, it is so sticky, I doubt this will work. So I just removed the dough hook and let it sit in the bowl covered with a dry cloth.

I took a peek 1 hour later and I was happy to see that it is rising. 1.5 hours later, it is about more than double in size. Hmmm.. not bad! So I floured the table top lightly and scraped it out of the bowl onto the floured surface. Then I kneaded it slightly. Not too bad. Slightly sticky, but manageable.

I weighed the dough (about 660g) and divided it into 3 equal portions. I missed our on her instructions to let the dough rest for 20 minutes. (I suspect I am dyslexic) and went ahead to start kneading them. I rolled each dough out like I would with tang zhong soft bread method and then formed into a ball. Not as easy as usual because it is a little sticky, but manageable with a scraper.

So after placing them into my longer than normal (30cm) bread pan, I covered it with a layer of cling wrap and my towel (because I only used enough wrap to cover the top of the tin and not enough for it to stick on the sides) and put it into the fridge. Next morning, when I took it out of the fridge, I took a peak and it was almost the same size.

2 hours later when I am finally awake, it was nicely proofed and ready to bake! =) I followed her baking instructions. In any case, this is the recipe below. But I have also shared a link to her recipe right at the top of this post.

Make sure bread is totally cool before storing. Or else the water vapour escaping the bread will cause your container to be moist. This is a rather big loaf. If know you cannot finish it within 2 days, break the bread into 3 different loafs put in a container or shrink wrap and freeze each portion.

When you want to eat it, wet the frozen bread and put it in your toaster or air fryer or oven and bake it at 130C until it is soft. Slice it open in half to check. If still cold and hard in middle, put it back and heat till it is nice and soft. If you overheat it a little, it will just be a little crusty on the outside, but still soft within. Still delicious. Take out, cool and slice. Remember, slice only when you are ready to eat to keep the bread in best condition.

For other delicious and healthy recipes, do visit our homepage or click on the food or health tab on top of our page. 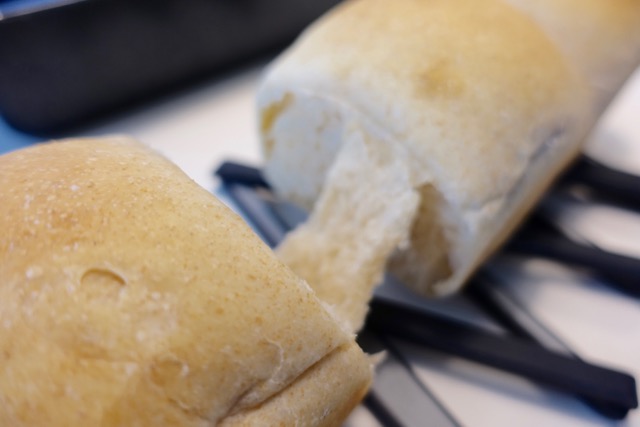 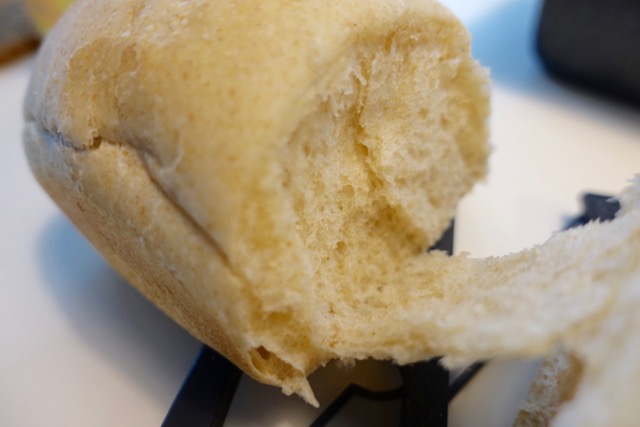 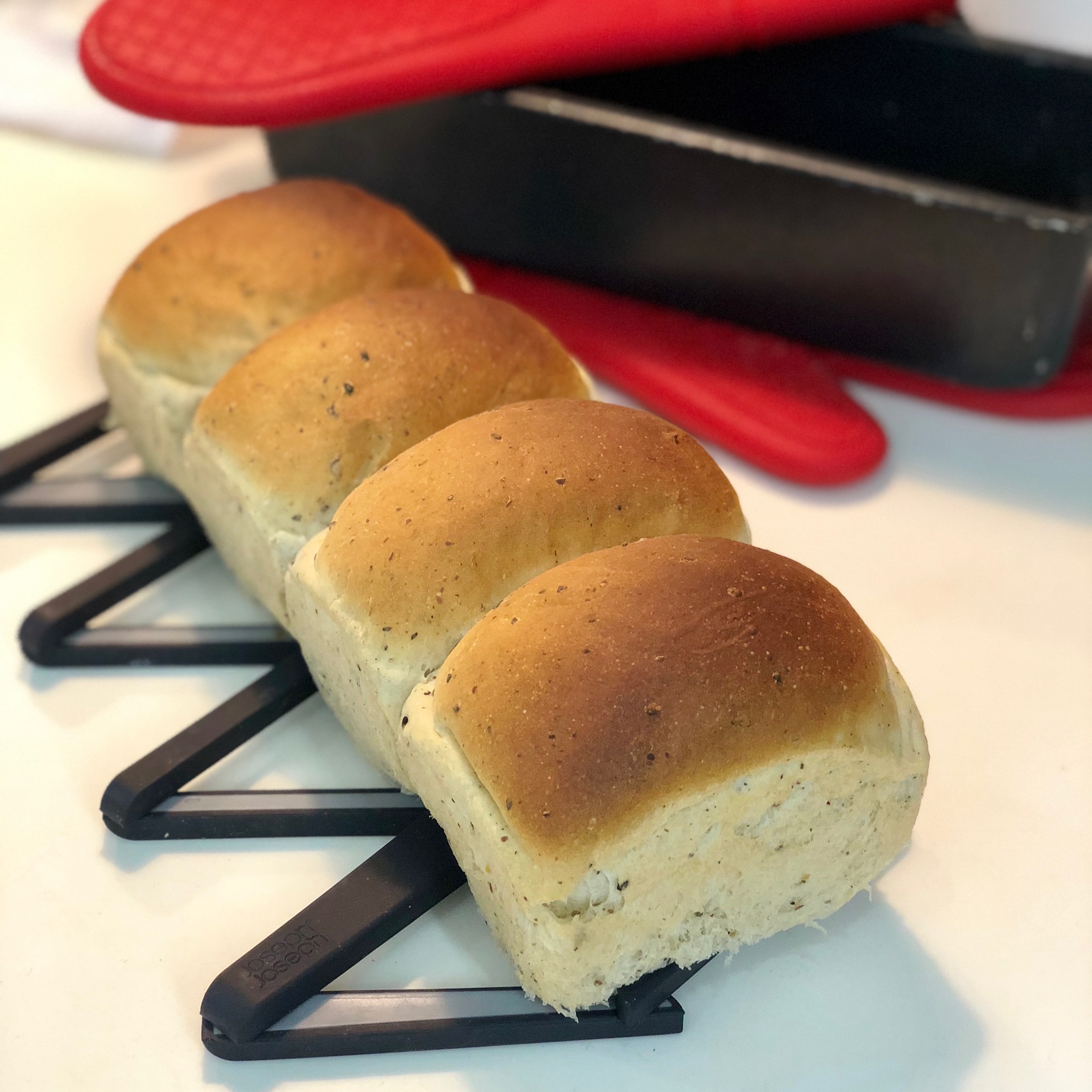 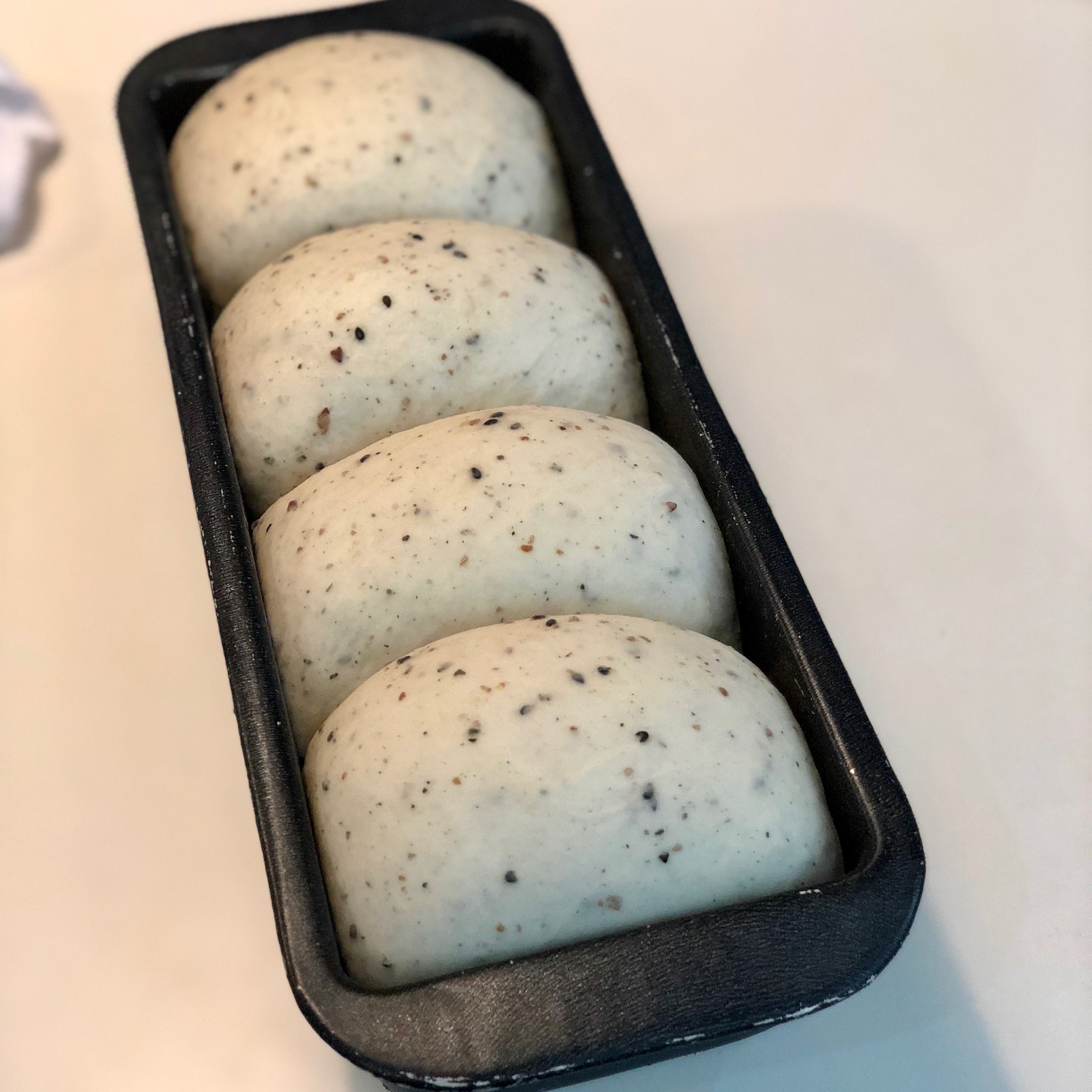 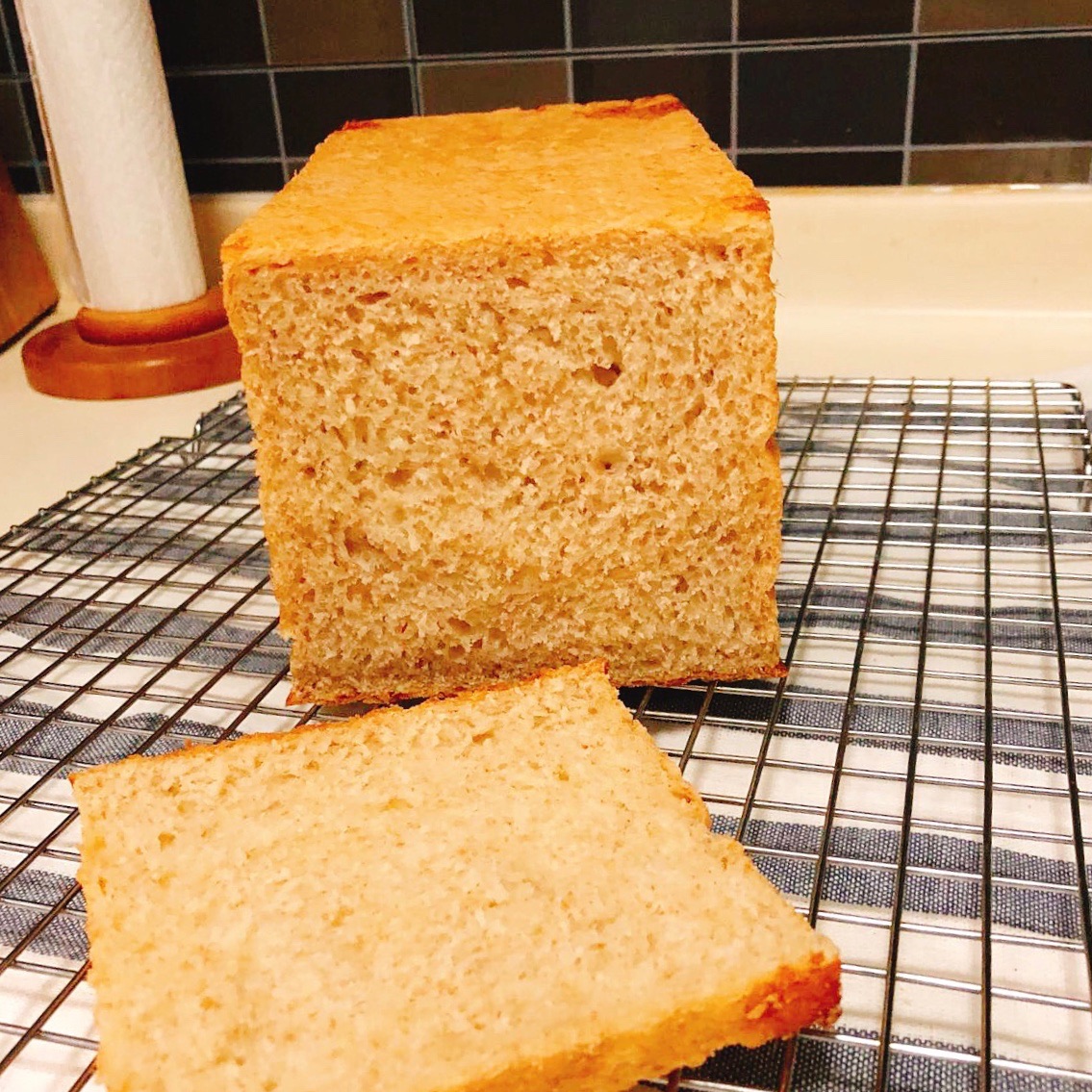 I replaced milk with 50g of coconut cream and 65g of water, added 2 tbsp of flaxseeds, 2 tbsp of goji berries in the kneading.

When shaping, i added 2 walnuts and 2 red dates to each portion of dough after rolling them out then rolling them back into a tight roll. and shaping into a ball.

Gyoza wings still in experiment by the hubs. We we

粗茶淡饭after all the feasting the past week.