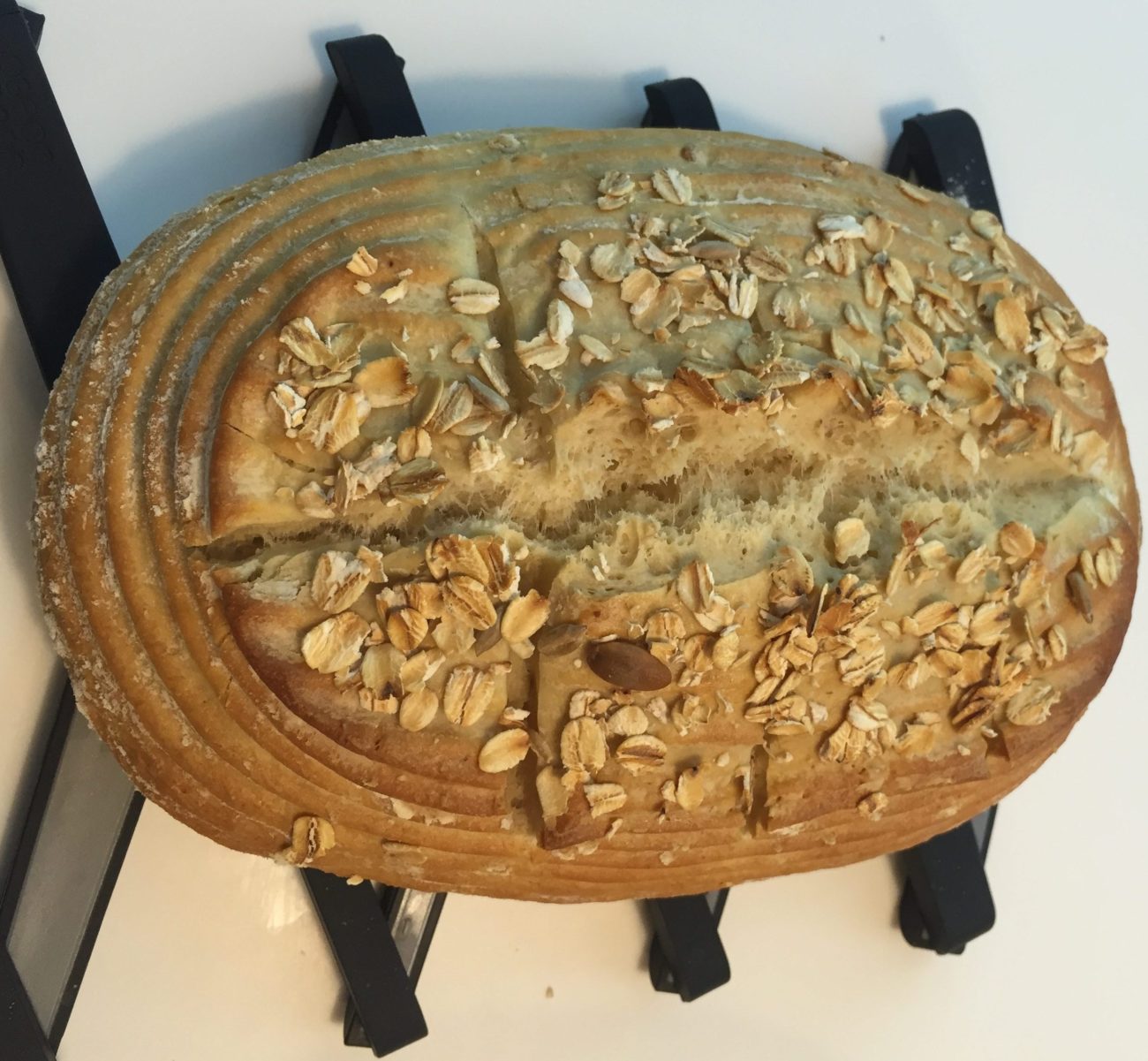 This is a recipe adapted to local tastes and climate. Asians don’t like sourdough that is too sour. I was not a fan of sourdough bread. I think of Boudin’s at Fisherman’s Wharf at SF and reading about how their bread is so special because of the yeast in the SF air and watching them make the bread. It sounded so magical but when I tasted the bread, it was just too sour for me. Sour like the name suggests, though white and fluffy. But sour bread just tastes quite… weird and wrong. I felt like I was eating bread soaked in citric acid but it was dry and fluffy.

But Ed has a fetish for making artisan or sourdough bread. He was fascinated about how we basically grow and bake our bread from scratch and it can taste so good. He read up and watched a lot of youtube videos on how to grow your own yeast. I was more interested in the idea of growing our own yeast than eating the breads. Oh but how we failed so miserably when we first started!

We watched youtube videos that were created for cooler climates and well, to cut the long story short, we finally grew our own yeast  after the third attempt but let’s just say that after a while the starter stank so bad we had to throw him out. (Yes “him” as we named our yeast – Fred to rhyme with bread – because they are living after all…It is like growing our little baby. LOL) Not only did the starter not live long, the breads we made with it using some online recipes were mostly dense and way too sour for our liking. So we have to give up for now till we can figure out what went wrong. It was really quite discouraging.

So when I saw that Totts was having an Artisan Bread Workshop, I decided to sign up. And OMG I am so glad I did. Julie Yee is a good teacher and I learned a lot from her. Though I still have to figure somethings out myself after (mainly because I quite “geh kiang”). Really, go sign up for the class if you still cannot figure this out after following my steps here. I made some adaptations to her recipe from my own experiments. Not only did we learn how to make starters, she also gave us some to start off.

Best part is, this bread is really soft on the outside, crusty on the inside and sooooo easy to make!!!! Plus, it has the right amount of tang without being overpowering. It never fails to wow guests when they come over for a meal because well, it is artisanal bread that you get at good Italian and French restaurants… The yeast in the recipe is optional. This is an additional insurance and to shorten the rising time. If you decide to skip this, then give the bread an additional rising time of 100%.

As Chef said, Singaporeans don’t like breads that are too hard or too sour. So this is her adaptation and another plus is that it does not require days or many hours to make. In the class, we also learned baguette and dark rye sourdough bread with olives and quite a few tricks. If you want to learn and understand more, I would recommend a class with her.

I recently read that sourdough bread is lower in GI than regular bread. So if it is wholemeal and multi-grain, I imagine it is even healthier! =) So what is in multi-grain? I got a pack from Phoon Huat and it essentially contains oatmeal flakes, rye flakes, sunflower seeds, linseed and sesame seeds. I will usually add some pumpkin seeds and ground flax seeds (since I have them lying around at home) and sometimes to give it some variety, I will add other nuts and dried fruits, olives, sun dried tomatoes, cheese, etc. Basically, this is a good recipe that acts as a base for you to add whatever else you want for taste and nutrients.

Besides sourdough, my other go-to bread base recipe is the tangzhong wholemeal bread recipe for a soft Asian style bread.

Busy and tired day... don’t even realize it is F

Time for some good old dumplings! Bak zhang is a w

Cheat lunch cos it is leftover chilli crab pasta w

With love from boss right in time for our team mee