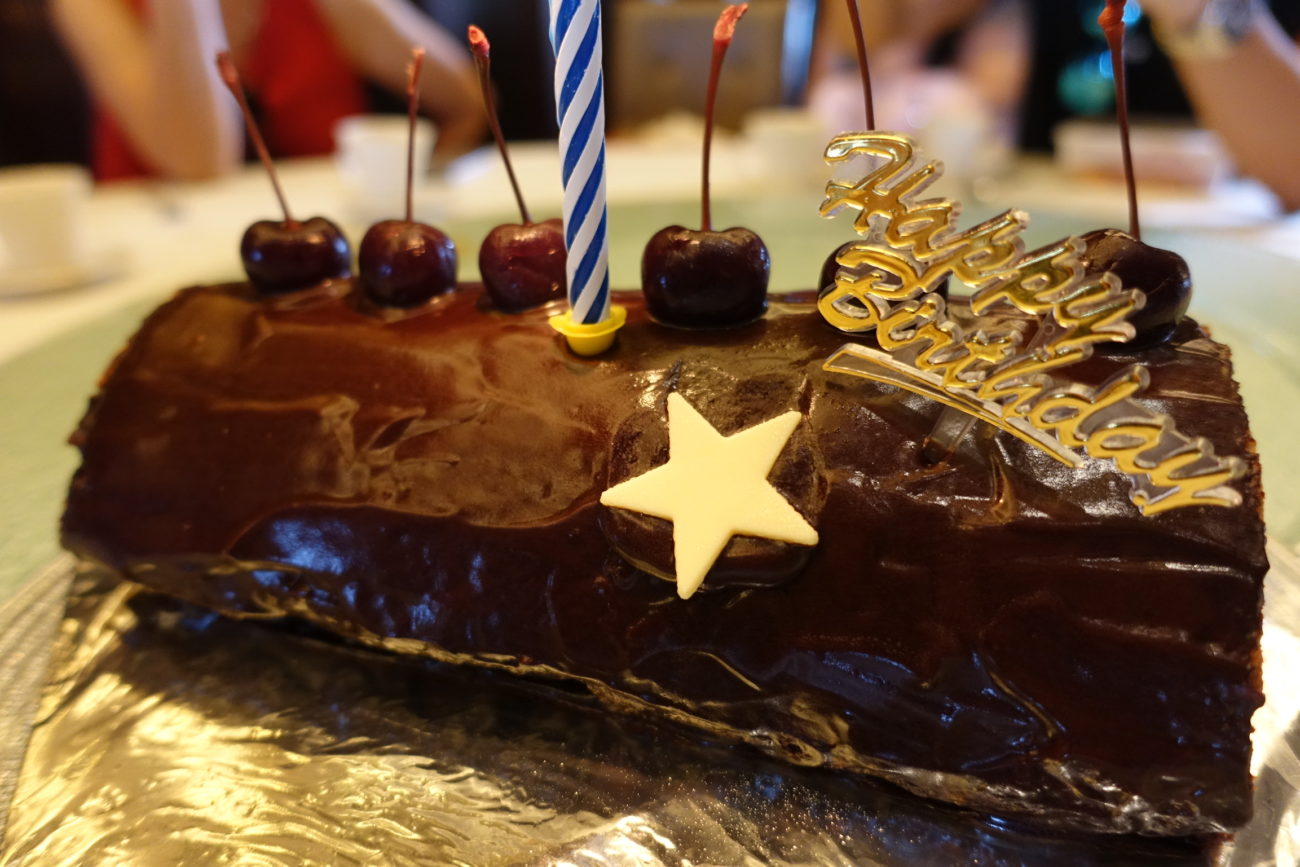 This is a black forest swiss roll recipe that I came up out of desperation and I am truly surprised that it is pretty good! Soft and light cake yet decadent with the chocolate ganache and surprise of tangy sweetness from the cherries within.

It is my brother’s birthday and I asked his wife what cake should I bake for him. She said his first choice would be black forest cake followed by Cheesecake. Cheesecake I can do but it is a little boring since I already baked cheesecakes many times before. So I thought I will take up the challenge and go for Black Forest cake. But the problem with this is that I am terrible at frosting cakes. So I came up with the idea of a black forest swiss roll with chocolate fudge.

The traditional black forest cake recipe consists of a chocolate cake, then brush on some alcohol and then a layer of cherries soaked in sugar syrup and alcohol, cream then cake then repeat and finally a layer cream and then chocolate flakes and cherries on top. Now that is pretty challenging and short of coming up with a terrible cake, I thought why not come up with some creative solutions?

First, I do not like to make the chocolate flakes in my kitchen as to make it stay solid, some people recommended using compound chocolate which is chocolate made with vegetable fat usually palm oil instead of cocoa butter. Nothing wrong with that but I don’t come across good quality compound on the retail shelf easily. So one solution is to use cocoa powder. But I feel it will not give enough oomph. So finally we decided on using a chocolate fudge. This has many advantages. 1) this fudge recipe is easy to apply and prepare. 2) Lesser steps and 3) Chocolate oomph is there. Then next we have to consider the shape of the cake. I did consider doing it like a regular layered cake. But in the spirit of Christmas and me being in the mood to try log cakes and swiss rolls, I decided to use this as an opportunity to give it a try.

The stress of swiss roll is to make sure the cake rolls well. So I did a trial cake to test the recipe before the actual cake. The trial cake was also to test the taste and application of the cherries in the roll. This is my experimental coffee swiss roll. Not too bad right? Can do with a bit more cherries if I want to make it a black forest cake.

I learned both the basic cake recipe from Totts last year and I have not baked the Swiss Roll since. Thus the need for me to do a trial run too. This cake texture is fluffy and light. You can use the same cake recipe and just slice up the cake and stack them up to make a regular cake. In fact, I did consider that so that I don’t have to worry about rolling. But hey, we all have to take up a challenge once in a while and learn right?

For the cherries, I would have bought fresh cherries and pitted it with a chopstick (poke through the cherry) then half it and soak it in alcohol like Grand Marnier for kick. (But my 3 yo darling niece will be eating the cake too and I don’t want to be accused of spiking her food, so my final cake was a non-alcohol cake. I even contemplated making one small part of the cake non-alcohol for her, but decided against it… because I was lazy. =P) If you want to do the alcohol, soak it at least overnight. Anyway, as I was saying, I would have bought fresh cherries. But not in season now. So I used canned ones. I bought the brand SW for the inside of the cake and for the outside I bought Hosen because it has the sticks on top.

The SW ones tasted pretty good actually and I would recommend it. It is not overly sweet as I was originally worried about. In fact, it is good enough for me to use it as a topping over ice cream or even to bake bread too. The Hosen one tasted a little cough syrupy but still ok. Not too sweet too.

The ganache used is actually from the Lana Cake recipe that was featured in 8days magazine many moons ago. I tried baking the cake and felt the cake was not the right texture (or maybe it was my skills) but the ganache was a keeper and I have been wanting to use it again but never got round to that. So many things to bake!!!!

One thing to note though that you should be pretty generous with the filling for it to taste more decadent. My photo below is an example of a healthier version with not enough mousse. Kept forgetting to take photos of cross section because it goes into the tummy to quickly! Will try to update soon. It is still good enough for people to move on to a second slice. I think thanks to the light fluffy cake. The thing to note about rolling the swiss roll is 1) keep the cake moist by covering it with a wet towel until you are ready to use it. 2) do not make the sponge too thick so it will be easier to roll and less prone to cracking.

Hope you enjoy baking and eating this cake as much as we did! Hope you enjoyed this post. Should there be any parts that are not clear, please feel free to contact us.